Pushing against the rock.....

I first came across this story while I was serving my mission. I thought that it was a great story then. However, for some reason now, it seems that much more applicable and poignant to me.
Perhaps we are not to move the rock, but to learn what we can while we push against it.


﻿
Pushing Against The Rock
By Anonymous

There was a man who was asleep one night in his cabin when suddenly his room was filled with light and the Savior appeared.  The Lord told him he had a work for him to do, and showed him a large rock, explaining that he was to push against that rock with all of his might.  This the man did, and for many days he toiled from sunup to sundown; his shoulder set squarely against the cold massive surface of the rock pushing with all his might.  Each night the man returned to his cabin sore and worn out, feeling that his whole day had been spent in vain. 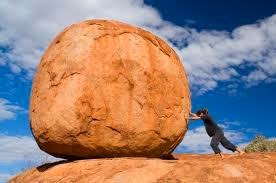 Seeing that the man was showing signs of discouragement, Satan decided to enter the picture - placing thoughts in the man's mind, such as "Why kill yourself over this, you're never going to move it," or "Boy, you've been at it a long time and you haven't even scratched the surface," etc. - giving the man the impression that the task was impossible and that he was an unworthy servant because he wasn't moving the massive stone.

These thoughts discouraged and disheartened the man and he started to ease up in his efforts.  "Why kill myself?' he thought.  "I'll just put in my time, putting forth just the minimum of effort and that will be good enough."  And that he did, or at least planned on doing until one day he decided to take his troubles to the Lord.  "Lord," he said, "I have labored hard and long in your service, putting forth all my strength to do that which you have asked of me.  Yet, after all this time, I have not even budged that rock half a millimeter.  What is wrong?  Why am I failing?"

To this the Lord responded compassionately, "My friend...when long ago I asked you to serve me and you accepted, I told you to push against the rock with all our strength, and that you have done.  But never once did I mention to you that I expected you to move it.  At least not by yourself.  Your task was to push and now you come to me, your strength spent, thinking that you have failed and ready to quit.  But is that really so?  Look at yourself.  Your arms are strong and muscled.  Your hands are calloused from constant pressure and your legs have become massive and hard.

Through opposition you have grown much and your ability now far surpasses that which you used to have.  Yet still, you haven't succeeded in moving the rock; and you come to me now with a heavy heart and your strength spent.  I, my friend will move the rock.  Your calling was to be obedient and to push, and to exercise your faith and trust in my wisdom...and this you have done.
at 11:00 PM

I love this story and with your permission I will post a link to it on my blog.

I first heard this story when my sister left on her mission, and it brings back strong memories. Thanks for sharing. One of the reasons I love it is that it's so true about how Satan and the Lord work on us. Satan gets us to obsess over measurable, obvious improvements. If you can't see it, it's not there. The Lord, however, really does want us to have an eternal perspective, whether or not we see day-to-day improvement. I know in my own recovery, I occasionally get frustrated since I can't see the healing taking place...but I need to trust God that my pushing isn't in vain.
R

My name is Imperfection.....

About me: I am the single mom of three energetic kids. I tell myself that I am doing the best, where I am, with what I have....although I struggle to even believe that. I have an ED, an eating disorder, been diagnosed with atelophobia (the fear of imperfection), and alexithymia (the sub-clinical inability to identify and describe emotions in the self). I am working (present tense) on figuring out how the Atonement applies to me, working on being obedient to the nudges I get from the Spirit to share my story and experiences in hopes that from sharing perspective, we may all grow together in our testimonies and our knowledge of being in the recovery position.

ED is an acronym used for the term 'Eating Disorders.' It is also a name given to the relentless voice inside that says I need to run faster, jump higher, climb more, be thinner, that the numbers should be smaller (on the scale and on that tag that labels my jeans)....the voice that encourages the lie that there is no 'Good Enough.' He is what pushes the need to restrict and purge. I have given ED his own personality traits in an effort to separate that thought process as separate from mine. I joke with my therapist that Satan and ED are brothers, although there may be more truth to that than I know.

The Premise behind "The Recovery Position"

"The Recovery Position" is typically a term refered to in the medical field for a position someone is put into after a tramatic physical event. It is encouraged that one be laid on their left side, their arms close beside them with the right knee bent so as to be towards the chest.

It is meant for the person to be in a position for healing, for self-preservation, for recovery...

This blog is an outlet from one who is a member of The Church of Jesus Christ of Latter-Day Saints (The Mormons) and has been an addict of sorts, with the belief that we are all addicted to something. Alcohol, drugs (medication or recreational), pornography, sexual addiction, gambling, gaming, time online, shopping/overspending may be just a few examples that may cry for a time of sobriety. While abstinence from these addictions may define sobriety, my addictive behavior is overcome by partaking. I have an eating disorder.